A New Island of Enchantment

Every time my flight lands on the Island of Enchantment, I feel so fortunate to be able to return to my favorite place in the world. As the airplane begins to descend, I contemplate through its window the pearly ocean waves breaking into the crystal blue waters. Magnificent is one of the words that go through my mind, thanking Mother Nature for gifting us with such a magical and beautiful place.

While the playful breeze flows through the palm trees, a melody of drums, maracas, güiros, and cuatros complements the joyful personality of the natives. The illusion that people dance instead of walking becomes alive when they graciously move their bodies, by swirling their legs and arms with the rhythm of the music.

I am always so happy to be there, delighted by a serenade of coquíes caressing us with their music after a quick shower splashes the land, I know I am home, in my Island of Enchantment. Captivated by the moment when the sun majestically submerges into the ocean, my heart rejoices while I focus my gaze into a sky that is shining with tiny bright stars. 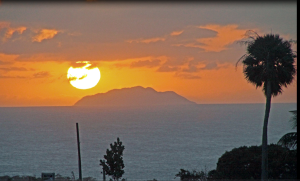 Feeling free, and touched by the enchanting sprinkle of its tropical nature, right after a marvelous sunset, I feel like going for a walk on the beach. “You can’t do that.” I hear my relatives telling me. My silence triggers an explanation, insisting that it is not safe. Many Puerto Ricans claim the economy keeps getting worse, and the crime rate keeps getting higher. As my mind returns with nostalgia to those days when I was a little girl, everything seemed so safe and free.

The perception the locals have about their island has changed so much. The bliss I feel through nature is blurred with shadows of fear. Instead of declaring that things are getting worse, why not try to change that perception? If we take the time to educate ourselves and our surroundings with the means to create a strong consciousness of what entails being a Boricua (Taíno name for Puerto Rican), we could make such a meaningful difference.

The human nature always takes for granted what becomes a routine. For most of the Puerto Ricans, the island is just a typical and natural habitat, and only very few would want to take the time to care for it. As Puerto Ricans, we have been gifted with the legacy of the Indian Taínos, our ancestors, have left us. They honored this land, considering it a paradise until the Spaniards discovered it. They believed certain areas of the island were sacred, ascending their minds and spirits through a dimension where they could connect with their divine selves.

Instead of criticizing its economy and social situation, why don’t you ask yourself; “what can I do today to improve the conditions of the island?” You may think that one person can’t make a difference. But, I assure you, your contribution could be inspiring to others, who would want to follow your actions. Every consequence is the reflection of thought. Change your perception and you will see the results! You have the power to do it.

Have you given thanks for the consecutive years when destructive hurricanes or earthquakes didn’t touch Puerto Rico? Have you felt bliss during those splendors sunsets when the warm sun diffuses into the sky, allowing the visible moon to lighten our evenings? Have you felt the angels whispering words of love when the music of a coquí soothes your spirit?

Have you gone swimming into the pristine waters the Taínos believed to have healing powers? Have you being to El Yunque and heard the energy buzzing through the woodland? As you hike the highest peak, you will witness slanted trees becoming playful gnomes that are manifesting their magic.

The first time the Spaniards landed Borinquen, they referred to Puerto Rico as the Island of Enchantment. Back then, the small island was surrounded by gold and precious stones. While the Taínos respected and worshiped Mother Nature, the ambition of the Spaniards transformed them into tyrannies, taking advantage of their hosts. Throughout the centuries, instead of spiritually evolving like the Taínos, many people have become blinded.

If you keep taking the island for granted and asserting how bad the environment is, you are contributing to the deterioration of our home. I urge you to join forces together, as proud Boricuas we are, we can make a difference, changing our perception to amend the consciousness of the masses. This world would never be the same without Puerto Rico. Gratitude toward the island, and mostly for being a Boricua, is the first step you can take toward restoring the collective morale of our Island of Enchantment. Little actions could miraculously attract significant results. Let the magic of our homeland touch you and by sharing it, watch its wonderful results.